Nouriel Roubini is basically the crypto anti-christ. He has been bashing Bitcoin since $xx ranges and continues to bash it. He sees nothing positive about any crypto, which obviously shows a huge sign of ignorance or bias.

In his own words:

You belong to a troll army of crypto zealots you bribed troll. Who is paying you & how much? Or just talking your shitcoins book?
(Saudis’ Troll Army. 100s of people work at a socalled troll farm to smother the voices of dissidents like Mr. Khashoggi

So an intellectual dwarf, tax-avoiding scammer, bloodsucker leeching on the blood of 4K dead Puerto Ricans pretending to help them with shitcoin after the hurricane out of his PR super-luxury mansion has now nothing better to do than making fun of a Nobel Prize winning economist 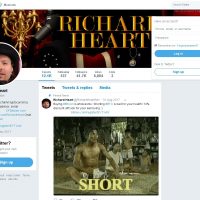